Everybody is welcome to join the event with an open mind, free spirit and in as much nudity as they dare this Saturday 10th of June, in the park opposite the white tower.

The event takes place from 3pm till late at night and includes :

For more info you can join the Facebook event

For the second year Thessaloniki is the host of the most exquisite gourmet event in the region!

I was happy to visit the show last year and discover a great range of gourmet food products that Greek land offers. I was also really impressed by the perfect organisation of the exhibition which was well above the usual greek standards.

Events like this can provide significant help to small producers to get their foot out of the country and export their products, while people from all over the world can have access to high quality food products.

I was happy that my company skgecoshop.com was able to support the event as a sponsor offering natural tableware for the food shows that took place during the event last year and I am happy to do the same this year !

If you are a wholesale or retail buyer, a trader, a Food & Beverage professional or simply a gourmand you do not want to miss this. Just follow your taste buds and visit the exhibition in the newly renovated Art House LAB”ATTOIR, on May 5, 6 and 7, 2017.

You can find all the event details and program of the parallel events in the website. Trade visitors are entitled to free entrance, otherwise there is a 5e ticket.

I was very excited to learn about a new website for our city! It looks like we start making progress on making our city accessible to travelers and tourists. 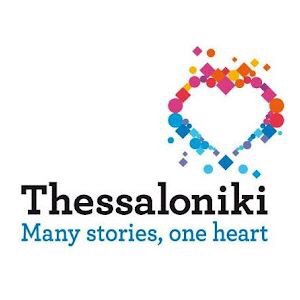 The site looks great and although all pages are not fully functional yet I will keep an eye as it looks very promising !

I urge you to start with some basic info here about the city today as well as some info on our city’s rich history here.

Thessaloniki has many stories to tell, starting by the moment of its foundation in 316/315 B.C.

Have a look at the new website and continue exploring our city.

January 2017 will stay in the history of Thessaloniki as the coldest month in the last 50 years ! Yes that is true, we had continuous temperature below 0 for a whole week ! I do not have a memory of this happening ever again, and the snowfall in the city last week was phenomenal !

For those of you who think Thessaloniki is always sunny and warm, keep this image in mind if you are visiting in the winter. 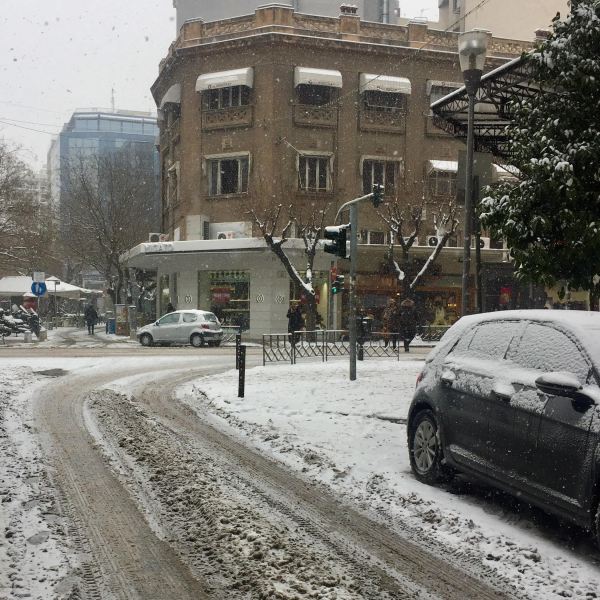 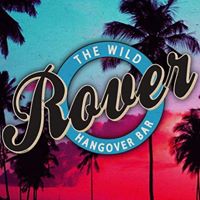 Rover is one of my favourite after work chill out destinations as it is located on the sunny side of Ladadika, and has a small very cute yard to enjoy.

Since it is winter and a sunny yard is a dream at the moment, let me tell you that it is also worth visiting for the unique wooden interior with many floor levels.

Rover is a classic nightlife bar,  hosting a lot of live bands and dj sets on a regular basis. It also hosts some vintage markets and is a well know film festival hot spot ! 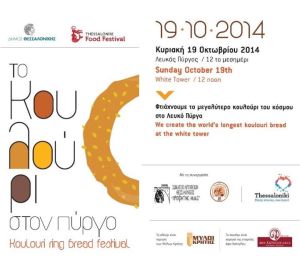 If you feel like you had too much activity over the weekend – I have something fun and relaxing for you on Sunday 19th. The world’s biggest koulouri bread will be made tomorrow noon at the White Tower.

This Sunday you will see something you will probably never see again; a giant “koulouri” made from 700kg flour and sesame seeds will be baked around the White Tower!

The koulouri, which is the city’s traditional bread delicacy ( something similar to a pretzel ), will most probably be the largest ever being baked. In the morning the bakers will also hand out normal sized koulouri to visitors, but in the end of the day the giant koulouri will be cut and anyone who wants to can have a taste.

This weekend it is all about sports in the city.

Besides the World Rowing Costal Championships we also have the 3rd International Half Marathon this Suturday 18th of October.

Someone could say this city is very athletic ! We do lots of sports, that is why we spend the rest of the time drinking coffee by the sea !

In fact this year’s attendance has grown from last year’s 12,000 runners, making this event another big athletic event for the city. But what is a half-Marathon and why is it half ? It is an endurance race and the little “brother” of the Marathon. As its name suggests, it is a race of the half distance of a marathon (42.195 m) that is 21.095 m.  The smaller distance and the fat that it uses city centre roads makes it very popular and easy for most people to participate.

My morning bike ride to the office had a surprise today ! Some kind of athletic event preparations by the sea.  I stopped to take some photos and I see that there are rowing athletes getting ready.  Apparently the World Rowing Costal Championships are held in Thessaloniki Greece between October 16-19

This was a nice surprise so as I know almost nothing about this event, I did some research to find out.

This is a new event that the city is organising for the first time – let’s hope it will become annual. It is organised by the Hellenic Rowing Federation and the Municipality of Thessaloniki. For Thessaloniki, sports are both a tradition and a perspective. 2014, the year during which Thessaloniki holds the title of the European Youth Capital, is the year that the city highlights its capabilities, its prospects and all its creative powers.

We are always happy to welcome new events in the city, especially those promoting sports and activities. 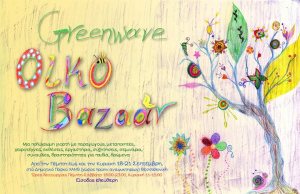 The alternative eco festival of Thessaloniki is back for the 4th time to celebrate nature, music, and activism in the heart of the city.

The event starts on Thursday 18th and will last till Sunday in the YMCA park, with film screenings, open talks, seminars, eco bazaar, children activities, music concerts and more.

This is a great chance to get in touch with natural alternative solutions to common problems, to open our minds, and start thinking differently.

In its 10th edition this year, Reworks is the audio – visual Festival of Thessaloniki that wishes to present the most modern artistic waves, from all over the world, to Greece. It presents, for the first time in front of the public, new musical and artistic trends through various works and showcases, while in parallel to that it presents the exclusive works of native artists and especially designed projects. Musical waves, concert and live performances, visual art presentations, workshops and a free street stage will be housed for the first time in the 10 year history of the festival within 4 days.

On day 1 Wednesday, September 17th, the festival will present a special concert of Max Richter with the Symphonic Orchestra of Thessaloniki. On Friday September 19th Reworks will present workshops and a street stage presenting domestic acts openly to the public as an answer to the economic crisis which strikes Greece, while in the night it will present a special line up on 2 stages at Block33. On Saturday 20th of September Reworks returns to its place of birth the MYLOS complex with acts from all over the world.

On the last day, as always Reworks will say goodbye with a special rooftop event at the MET Hotel hosting Resident Advisor with a special line up on board .

For another year, Reworks will become a collection of sounds and ideas, a meeting point of resonant voices, a window to tomorrow. From the electronic sound and disco aesthetics to Neo-Classical, pop, funk, soul & jazz and from the performances of established artists to the first performances of new and developing creators, it will try to visualize the need for a cohesive motif of entertainment.