Everybody is welcome to join the event with an open mind, free spirit and in as much nudity as they dare this Saturday 10th of June, in the park opposite the white tower.

The event takes place from 3pm till late at night and includes :

For more info you can join the Facebook event 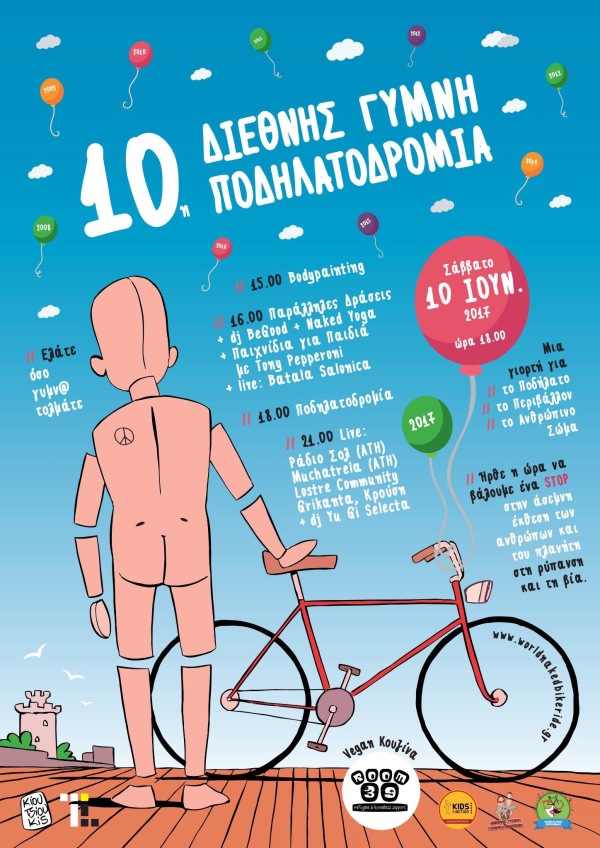 For the second year Thessaloniki is the host of the most exquisite gourmet event in the region!

I was happy to visit the show last year and discover a great range of gourmet food products that Greek land offers. I was also really impressed by the perfect organisation of the exhibition which was well above the usual greek standards.

Events like this can provide significant help to small producers to get their foot out of the country and export their products, while people from all over the world can have access to high quality food products.

I was happy that my company skgecoshop.com was able to support the event as a sponsor offering natural tableware for the food shows that took place during the event last year and I am happy to do the same this year !

If you are a wholesale or retail buyer, a trader, a Food & Beverage professional or simply a gourmand you do not want to miss this. Just follow your taste buds and visit the exhibition in the newly renovated Art House LAB”ATTOIR, on May 5, 6 and 7, 2017.

You can find all the event details and program of the parallel events in the website. Trade visitors are entitled to free entrance, otherwise there is a 5e ticket.

I was very excited to learn about a new website for our city! It looks like we start making progress on making our city accessible to travelers and tourists.

The site looks great and although all pages are not fully functional yet I will keep an eye as it looks very promising !

I urge you to start with some basic info here about the city today as well as some info on our city’s rich history here.

Thessaloniki has many stories to tell, starting by the moment of its foundation in 316/315 B.C.

Have a look at the new website and continue exploring our city.

Do you know what is the star sign of Mickey & Minnie Mouse and probably the secret of their passionate love story ? I recently discovered thanks to one of my oldest friends who is among other things a self-taught artist.  She recently decided to use her talent in drawing to explore areas such as astrological sings, alphabet letters, cartoons and a combination of those.  Her talent is amazing and is received with great enthusiasm form all over the world. She likes to personalise her drawings using a combination of letters and star signs, so if you look closely at her work, you will discover a story behind each artwork.

Mickey & Minnie Mouse in love (their star sign is Scorpio)

I’ve been pretty busy lately and neglecting the blog due to this new project. Skg Eco Shop is the first exclusively Eco Online B2B shop.  The shop is addressed to hotels, restaurants, catering businesses (ho.re.ca) all over Greece, providing with exclusively Eco and Biodegradable solutions on disposable catering items such as plates, cups, cutlery, bags and more. Have a look and feel free to suggest the shop to anyone you think might be interested.

New seafood restaurant in town, and it is called Marea ! My friends and I visited it last month during the cold weather to prepare ourselves mentally for summer.

It is owned by the team of Glykanissos, a well known restaurant for its top quality, so we had high expectations for this one ! Marea managed to exceed our expectations as the food and service were simply excellent.

You will find a big selection of fish as well as risotto, linguini with shrimps, gnocchi with crawfish and many excellent starters, as well as a massive wine list.

I saved the best for last, the dessert ! As a chocolate lover myself, the chocolate soufflé is a reason on its own for me to get back ! I have a video also but some people hated me after posting it so I ‘ll just share the photo with you !

January 2017 will stay in the history of Thessaloniki as the coldest month in the last 50 years ! Yes that is true, we had continuous temperature below 0 for a whole week ! I do not have a memory of this happening ever again, and the snowfall in the city last week was phenomenal !

For those of you who think Thessaloniki is always sunny and warm, keep this image in mind if you are visiting in the winter.

During last month’s Open House I had the joy to visit the beautiful new addition to Thessaloniki’s accommodation options – Caravan B8B.

I had heard about it during last year’s Open House, but did not have time to visit it, so this year it went on my list, and I was not disappointed ! First of all, the owners offered on of the best tours in Open House. It was broken down in parts and was equally fun and informative.

The renovated neoclassical building located in 1 Rempelou street was built in 1929 and originally it was used as a small “seragio”. The seragios was inns that hosted travelers. It was subsequently used as a residence for is owners. In 1998 with the decision of the Ministry of Macedonia-Thrace the building was designated as a listed property. Later in 2001 it was leased and restored by the National Bank. When the National Bank left the building a team of young people joined forces to lease the building and make their dream a reality.

The caravan is a trip over time. A mix of contemporary and old elements. Furniture from George’s friends, Harry’s grandmother,Alexander’s aunt,  were repaired and placed in the space.

Everything has its own history. But the people is the most important element. The Caravan is a travellers inn, a modern bed and breakfast in the heart of the city centre. A Caravan with a hat that wants to be open to the residents of the city and is trying to blend travellers with locals, visitors with neighbours, friends with strangers.

Kapani market is one of the most traditional markets of Thessaloniki, since the Ottoman occupation. It is a pedestrian area located between the streets of Egnatia, Aristotelous, Ermou and Venizelou. Some of the streets are covered and some are open. It is still very lively today as it has been all these years.

The great variety of products, such as meat, fish, spices, travel equipment, kitchen utensils, clothing, shoes, ecclesiastical and touristic items and more, as well as the low prices and the location in the city’s centre, make Kapani a very popular destination all day long.

It is an essential visit if you are interested in the city’s gastronomic history and evolution since it transfers you to a different era.

Do not forget to stop for a traditional greek coffee in Hozeva while you are there.

As we prepare to say goodbye to summer, we try to enjoy the last summer nights as much as possible.

A friend was visiting from London for the weekend and we wanted to eat somewhere old style + trendy ! What a combination is this, you are probably wondering, does it even exist ?

Yes it does exist, in Kourbeti, a cool new tavern in Ladadika. It opened exactly one year ago, I know because I was there, and we had a lot of fun! The food is typical greek with a twist. I particularly love their fried potatoes and smashed cheese (chtypiti), but everything else I tried was also delicious!

The environment is very relaxed and super friendly. If you go at night I suggest you go before 9 otherwise it might be difficult to find a table as it is quite small !