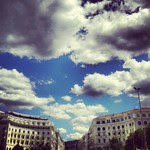 Aristotelous Street and Square is the heart of the city !

It connects the city since it is a central meeting point.  It runs from the ancient roman market ruins down to the waterfront. Whether you visit Thessaloniki for one day or for one month, this is a place you cannot miss !

Named after the great philosopher Aristoteles, you will also find his statue at one corner on the lower part.  It is a place for concerts, fairgrounds, and any sort of seasonal outdoor activity. If something is happening in the city, you will usually find it here.

Streets that cross with Aristotelous are, Nikis avenue which is the waterfront, and as we go up Mitropoleos a shopping street, Tsimiski the main shopping street, Vas, Irakliou and Ermou, minor shopping streets, Egnatia street, and Filipou street which is where you will find the ancient roman market !

Aristotelous Square (Greek: Πλατεία Αριστοτέλους, IPA: [plaˈtia aristoˈtelus], Aristotle Square) is the main city square ofThessaloniki, Greece and is located on Nikis avenue (on the city’s waterfront), in the city center. It was designed by French architect Ernest Hébrard in 1918, but most of the square was built in the 1950s. Many buildings surrounding the central square have since been renovated and its northern parts were largely restored in the 2000s.

I am featuring one of my own photos as well as a famous one by absolute vodka which celebrates aristotelous’s shape !

One thought on “Aristotelous Square”